Cookies allow for a variety of features that make your visit to Restek more enjoyable.

You are here: Home

Short-chain volatile amines, such as monomethylamine, diethylamine, and triethylamine, are of great importance in the petrochemical industry and play a critical role is inhibiting corrosion. Volatile amines are used as gas-scrubbing agents to remove hydrogen sulfide from refinery and natural gas streams, as well as for removing carbon dioxide during the production of ammonia. While accurate data on volatile amine content is vital for optimizing the manufacture of compounds of many different classes, gas chromatographic analysis can be quite challenging due to their basic nature and high polarity. Because of these characteristics, amines will interact with active sites in the analytical column and along the sample pathway, resulting in broad, tailing peaks that are difficult to integrate accurately.

In order to improve chromatography for volatile amines, capillary columns must be highly inert and offer good retention and efficiency at low temperatures. In addition, they must be able to withstand tough matrices, as amines are often analyzed in the presence of water, alcohol, or ammonia. Base-modified polyethylene glycol columns are one option, but they suffer from relatively poor stability and a loss of efficiency below 60 °C. Siloxane columns are another option, but most commercially available siloxane-based columns for amine applications work well for pure samples, but perform poorly in the presence of tough matrices, such as water (Figure 1). Until recently, commercially available columns for the analysis of volatile amines suffered from short lifetimes and displayed poor reproducibility in amine response. A new column developed by Restek, the Rtx®-Volatile Amine column, offers improved chromatographic performance and stability. 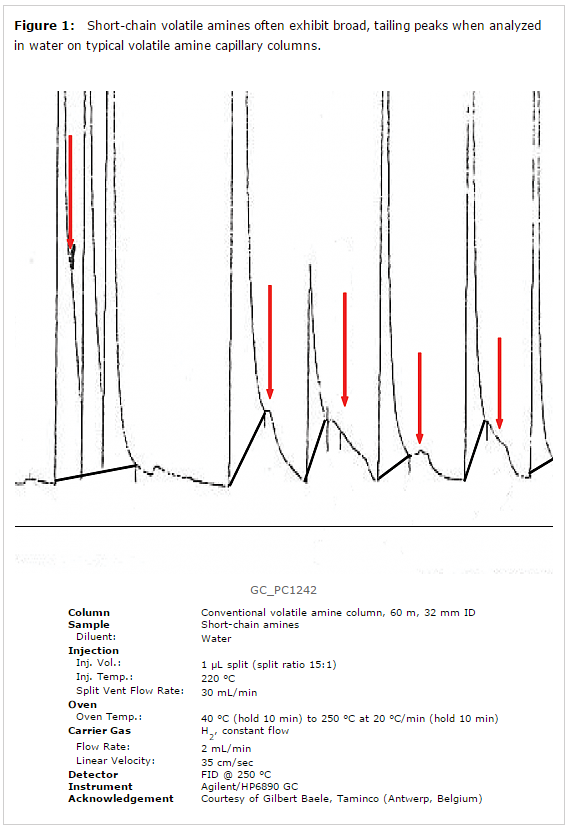 In order to assure symmetrical peaks and good reproducibility, both surface deactivation and polymer stability were considered in the development of the Rtx®-Volatile Amine capillary GC column. Proper deactivation reduces surface adsorption of short-chain amines, which improves peak shape significantly. As shown in Figure 2, highly symmetrical peaks are obtained for monomethylamine, diethylamine, and triethylamine, as well as for methanol. In addition, the film thickness was increased in order to maintain efficiency at temperatures as low as 40 °C, and the stationary phase was intensively cross-linked in order to improve mechanical stability in the presence of water. The result is a new column chemistry that reliably produces good peak shape and response for volatile amines. As shown in Figure 3, even after 40 injections of amines in water, peak shapes are almost identical. 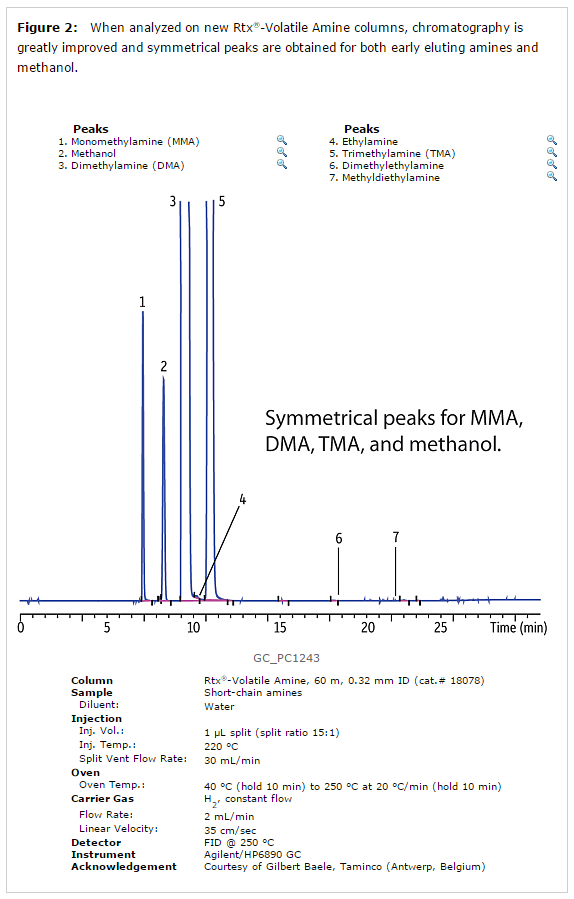 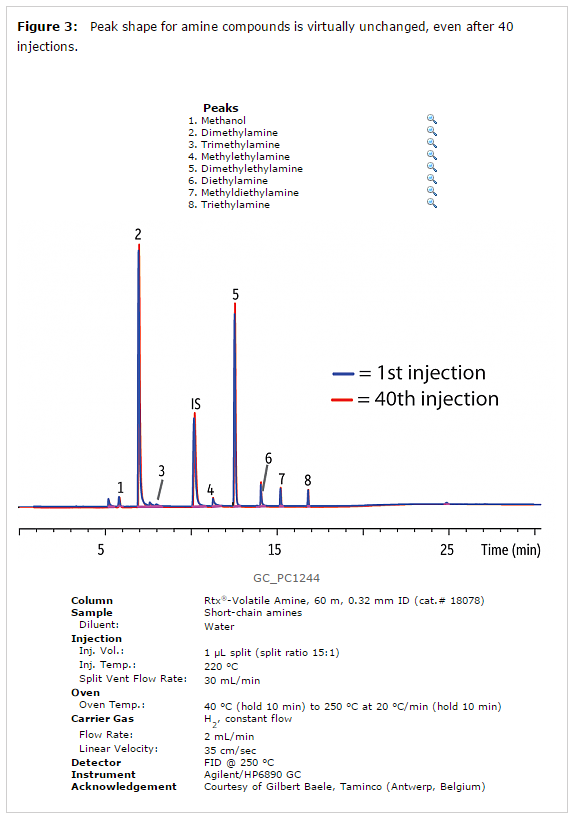 The strong dipole in the basic amino group is what causes the interactions with the surface silanols that result in nonlinear adsorption effects. In practice, derivatization can be used to reduce these interactions, but it is time-consuming and can produce secondary matrix effects that alter recoveries. Derivatization can be avoided by using an Rtx®-Volatile Amine GC column as the robust column chemistry minimizes reactivity and elutes the amine compounds in sharp peaks, even in the presence of water. Priming is another technique that is often used in amine analysis. In this approach, several initial injections of a high boiling point amine are performed so that the priming amine compound reacts with any active sites and provides a systemic, but short-lived, deactivation. While, using a properly deactivated analytical column provides a better long-term solution, priming can be useful in that the priming compound can, at least temporarily, deactivate non-column parts of the sample pathway, including the injection and detection port liners.
In addition to its inertness and tolerance of aqueous matrices, the Rtx®-Volatile Amine column also offers high loadability. As shown in Figures 4-7, this column provides excellent chromatographic separations of impurities in pyridine, diethylamine, triethylamine, and isopropylamine. In addition, when analyzing ammonia and water, both compounds elute as nearly symmetrical peaks (Figure 8). 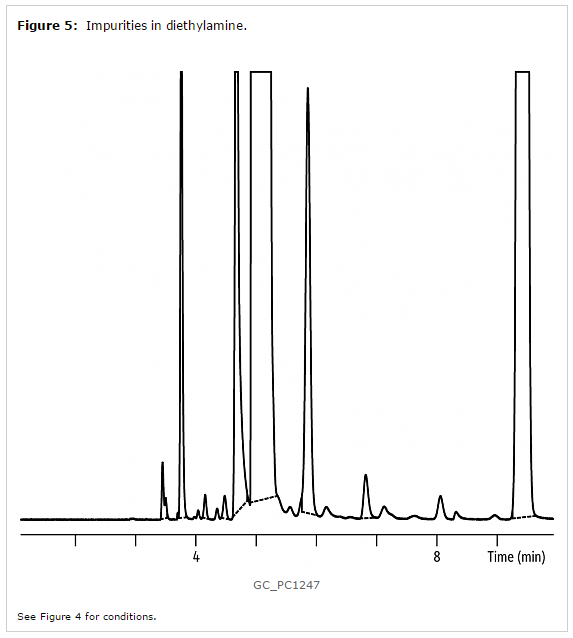 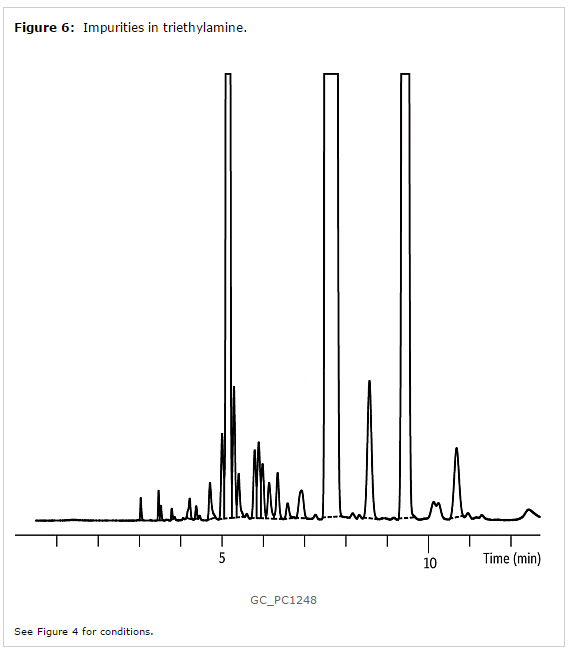 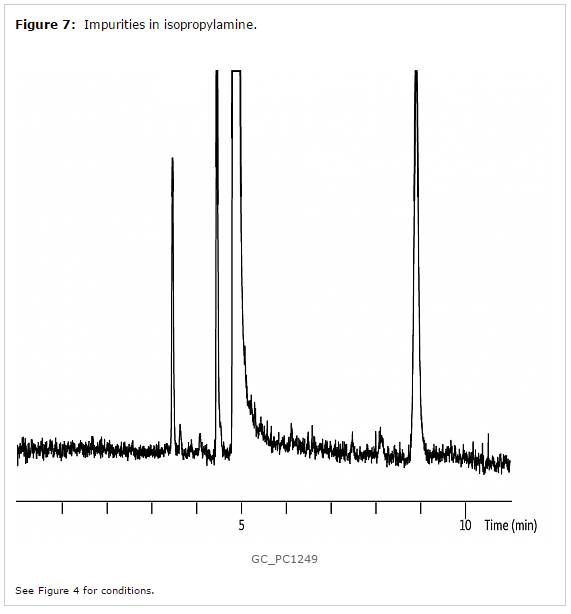 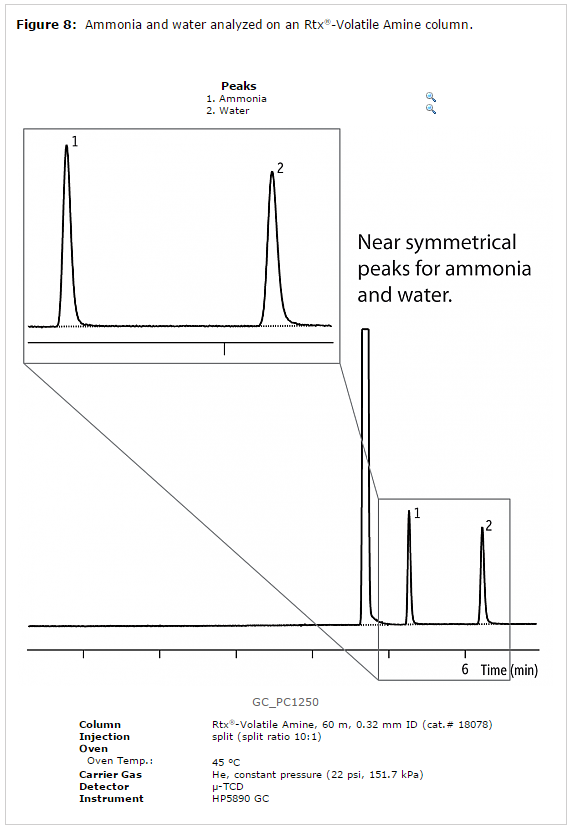